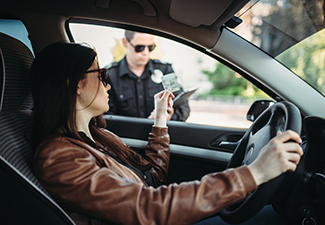 In the state of Missouri, a motorist may be issued a traffic ticket for committing a traffic offense or violating a traffic law. Examples of traffic violations include speeding, drunk driving, running a red light, reckless driving, driving without a license, or parking near a fire hydrant. An experienced Missouri criminal defense attorney can enlighten you about the consequences of a traffic violation and determine how to fight your traffic ticket.

It's natural to feel overwhelmed when facing a traffic ticket. At Walker Law LLC, I'm committed to offering detailed legal guidance and reliable representation to clients in their traffic violation cases. Using my extensive knowledge, I will investigate the facts of your case, fight vigorously to protect your legal rights, and keep your driving record as clean as possible. My firm is proud to represent clients across Chesterfield, Cottleville, Town and Country, as well as throughout St. Louis County and Charles County, Missouri.

A traffic violation occurs when a motorist violates or disobeys any law or rules regulating the operations of motor vehicles on roadways, highways, and streets. In Missouri, traffic violations may be categorized into moving and non-moving violations.

Each of these traffic violations is assigned a point value which will be added to your driver's license and be part of your driving record.

An experienced traffic attorney can educate you about the Missouri point system, as well as the penalties and fines for each traffic offense.

If you violate a traffic law in the state of Missouri, you may receive a traffic ticket, demerit points, fines, license suspension, and other penalties. The penalties for your traffic offense will depend on the Missouri point system.

Advisory Letter: If you accumulate 4 points within a period of 12 months, you will receive a point accumulation advisory letter from the state's Department of Revenue.

License Suspension: Your license will be suspended by the Missouri Department of Revenue, Driver's License Bureau, for accumulating at least 8 points within a period of 18 months.

Licenses Revocation: In addition, the Missouri Department of Revenue, Driver's License Bureau will revoke your driver's license for one year if:

Furthermore, accumulating demerit points on your driving record will result in higher fines and penalties. For this reason, you need to retain a highly-skilled lawyer to help fight your traffic violations. An experienced criminal defense lawyer can enlighten you about the seriousness of your traffic offense and help build a strong defense strategy in pursuit of the most favorable outcome.

Here are some possible legal defenses to fight your traffic violation allegations in Missouri:

A knowledgeable attorney can step in quickly on your behalf, craft an effective defense to fight your Missouri traffic ticket, and make sure those accusations don't ruin your life.

How Walker Law LLC Can Help

Getting convicted for traffic violations can have a negative impact on your driving record, including massive fines, demerit points, license suspension, increased insurance premiums, and other devastating penalties. When issued a ticket for traffic violations, retaining a skilled criminal defense attorney is imperative for proper guidance.

At Walker Law LLC, I have the knowledge and resources to guide and represent individuals wrongly accused of violating a traffic law. As your legal counsel, I will evaluate every detail of your case and strategize an effective defense to help fight your charges. I will represent you diligently in traffic court, seek to dispute the accusations against you with factual evidence, and help protect your driving privileges.